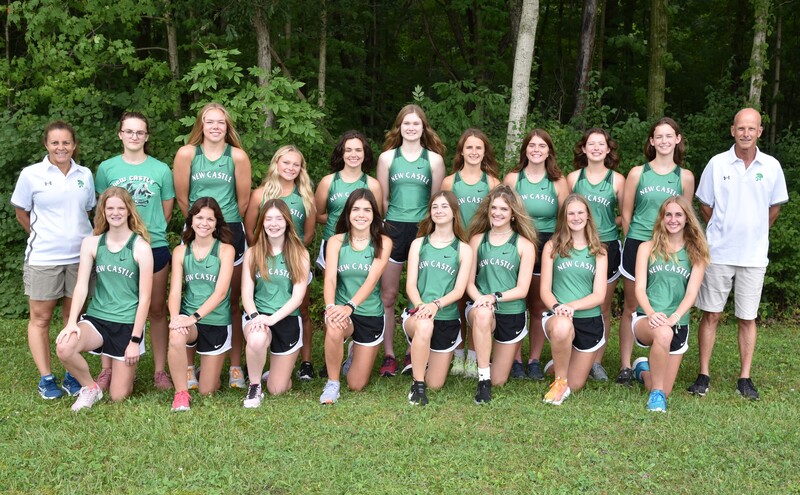 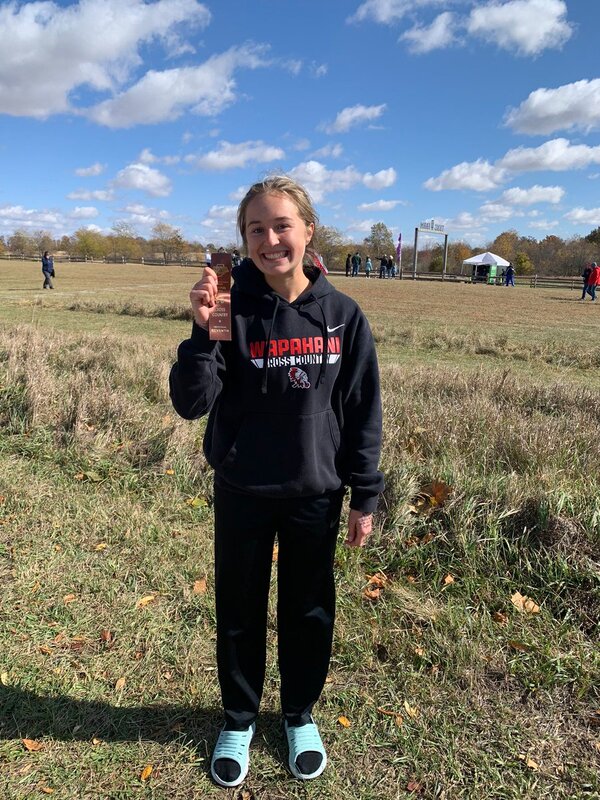 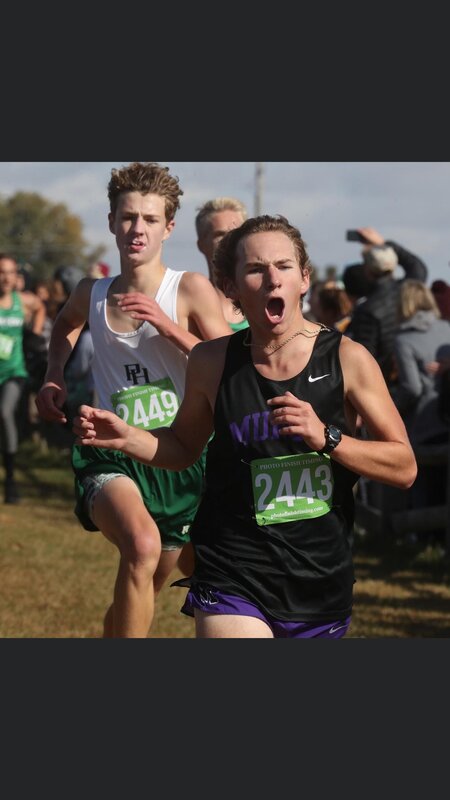 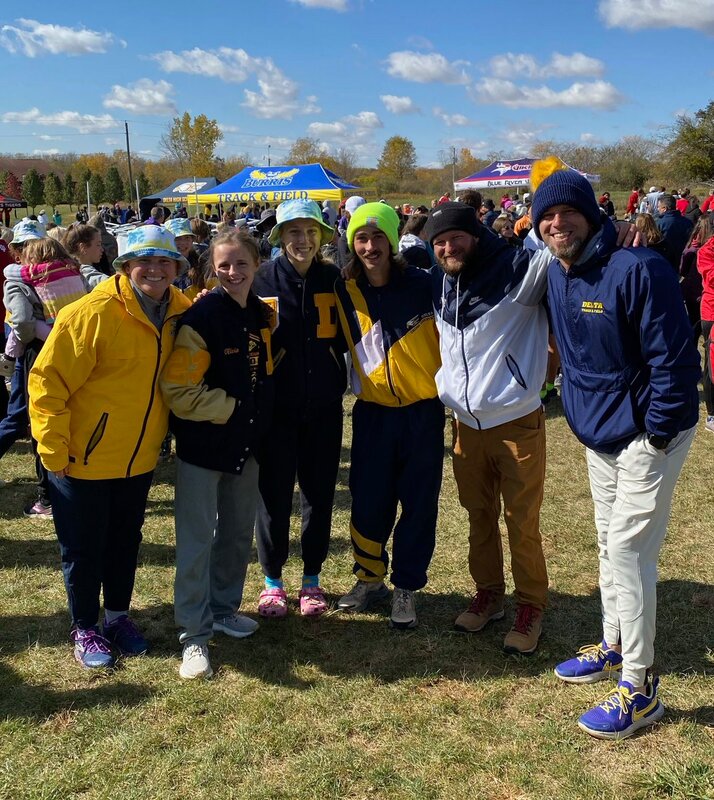 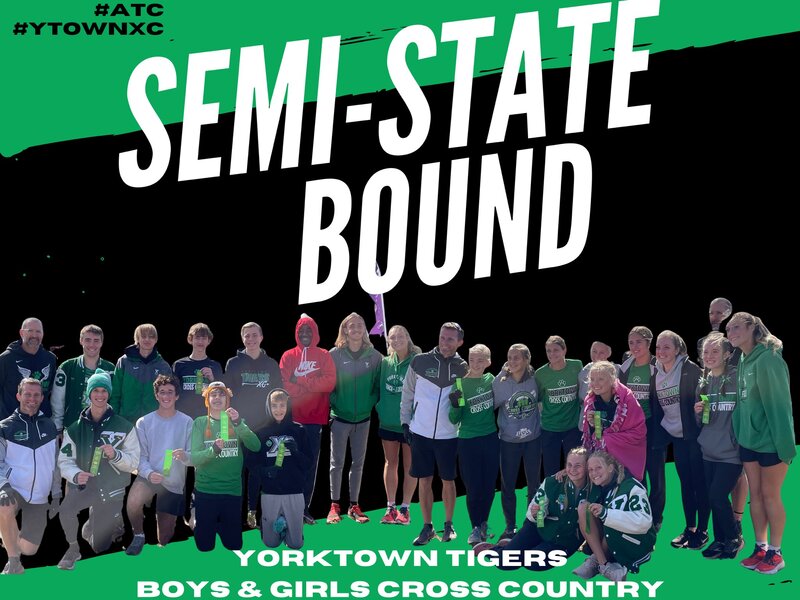 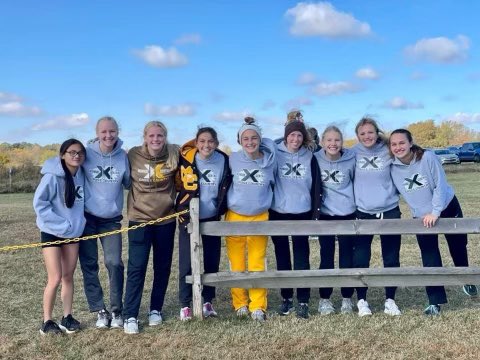 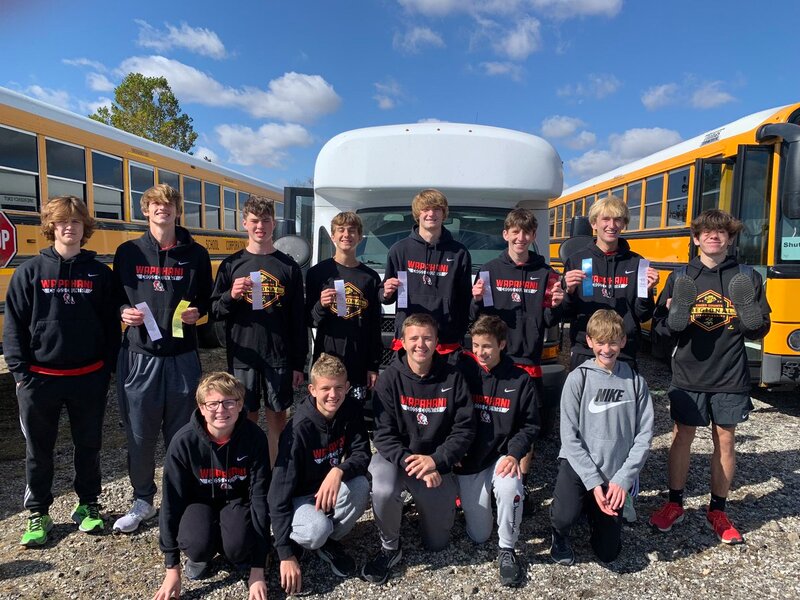 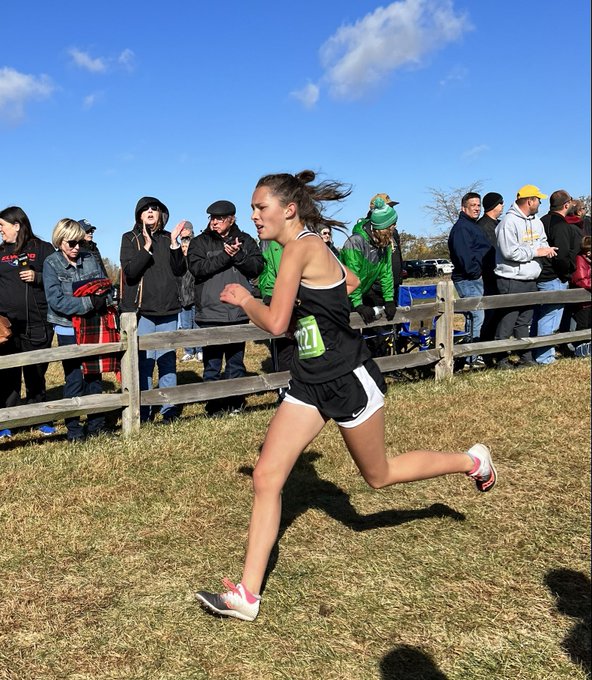 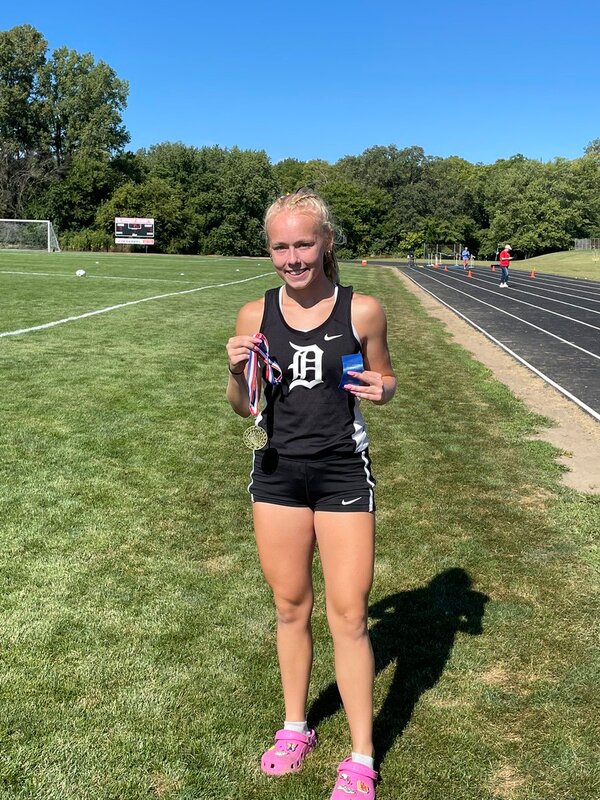 IT’S SEMI-STATE WEEKEND!!!! Meaning that the only way for ECI Runners to run another race this season is to PUNCH THEIR TICKET to Lavern Gibson for the IHSAA Single-Class State Meet. Here’s a breakdown on what to expect from every ECI semi-state qualifier and team this Saturday at IWU and Shelbyville:

Southerland is expected to be tested for the first time in several weeks as Homestead’s Addison Knoblauch is the real deal and is an expected top all-state finisher alongside Southerland. This Saturday figures to be a teaser before another monster battle between the two (and Bishop Chatard’s Lily Cridge with the possibility of the Park Tudor girls getting into the mix) next week for the individual state championship but enjoy this one as both runners will be expected to run it to win it.

These three MEC foes have had many battles all season long and will go after it on the course one more time this weekend with a ticket to Lavern Gibson on the line. The ECI Runner analytics team predicts that for the last 2-3 state qualifying spots there will be about 7 girls on the bubble (including the three from ECI) to advance for the state meet. This usually translates (and this is pretty simple to understand) that the kids who run their best race of the season figure to have the best chance to advance. Here’s to hoping for there being three spots left for three girls out of the Mid-Eastern Conference. *Insert fingers crossed emoji*

First off, congrats to all of these girls for advancing to the semi-state round as it is a huge accomplishment for ECI as a whole. This group comprises a variety of talent from ECI with a lot to prove in this race. First off, there’s Sydney McFarren, who has probably been the surprise breakout runner across ECI this year. This group also includes junior Allison Clamme who is now a back-to-back semi-state qualifier and Randolph Southern’s Allie Black whose semi-state appearance is a great opportunity for a resurgent Rebel program to continue to grow. And then there are the two seniors running as individuals, Delta’s Olivia Bohanon and Cowan’s Brynn Wright who get to race against some of the state’s best, with their HS running careers on the line, on arguably the fastest course in the state. Not a bad situation to be in to say the least.

Starting with Monroe Central, this squad has a lot to gain from running (and running well) this weekend. With the Lady Bears three top runners being underclassmen including juniors Addison Coe and Katie Osborne and freshman Avery Thomas there is a lot of experience to be gained by running in a semi-state race. Aside from future aspirations, this is a team that can beat several teams out of the New Haven Semi-State and this 2022 Lady Bears team figures to have their best team finish in their school history (*note to self, ask TikTok Star/Monroe Central Athletic Trainer KP what the best semi-state finish for the Monroe Central XC Girls team is.) UPDATE: According to KP, the current best Girls Monroe Central finish at semi-state is "18th in 2017!."

Both the Yorktown and New Castle programs have been perennial powers across ECI over the years with frequent visits to their respective semi-state meets (New Haven for Yorktown; Shelbyville for New Castle.) With that experience, expect these teams to show up and run well on Saturday. Especially look for the seniors on both teams who have been pillars to both teams success throughout their high school careers including New Castle’s Lydia Harvey, Ella,Garvin and Savannah Kernel as well as Yorktown’s Ali Smith and  Rachael Stagge to run very well this weekend.

The seniors advancing out of this group include Delta’s Clay Batio, Winchester’s Aidan Moystner and Blue River’s James Crull who figure to very literally be racing with their HS career on the line (and like we said with the girls preview, what a better way to try to turn a time than on the IWU course at a meet like semi-state. The group also includes junior’s Eli Chamberlain, who is now a three-time semi-state qualifier and Muncie Central’s Gabe Reynolds who is now a two-time semi-state qualifier. Rounding out the individual advancing group out of ECI is Cowan freshman Jackson Bradley who surely hopes to make the most out of the opportunity to race against some of the state’s best.
​
ECI Advancing Teams
Yorktown
Wapahani
​
Yorktown is the only team in ECI that had both of it’s girls and boys teams advance to the New Haven Semi-State so with that, expect the Tiger delegation to be large as Coach Turner continues to build his programs. For the boys team, junior Johnathon Loney will lead the relatively young Tigers in what will be a great measuring stick race to see where they stack up against the best of what the various Fort Wayne schools have to offer…and the South Bend schools too….oh, and don’t forget about the Hamilton County schools that also compete in the New Haven Semi-State as well.

When it comes to the New Haven Semi-State Meet, this Wapahani Boys team is…..interesting to say the least. While still on the outside looking in for a top-six state qualifying spot, this team will have aspirations to make history in more ways than one this weekend. On the docket for the Raiders will be surpassing their current best team finish at Semi-State (which was a 14th place team finish last season.) Wapahani is also in good position to be one of the top-10 teams overall (which a Delta Sectional team hasn’t accomplished in many years) *ECI Runner is still waiting on the IHSAA website to finish its update to get an accurate date on this.* The Raiders could also POSSIBLY be punching the last team ticket to Lavern Gibson for the IHSAA State Meet (which would be the first time a Delta Sectional team qualified for state since Muncie Northside did so in 1981. And for our younger audience, Northside used to be a high school and not just the middle school it is now.) It has been a historic season for Wapahani, how much more historic it can be will be determined at IWU on Saturday.

​Nicki Southerland
After a runner-up finish at the New Haven Semi-State Meet a season ago, sophomore Nicki Southerland will be looking to take top honors at Huntington University this weekend. So far in the tournament, Southerland has won the Delta Sectional by a 2 minute 15 second margin and the Delta Regional by a 1 minute 23 second margin and even though the semi-state round will bring in even more competition, Nicki still figures to be the favorite to come out on top at the New Haven Semi-State this weekend.

Boys' State Hopefuls
It appears that heading into Saturday there are a handful of boys with an outside chance of punching a ticket to the state meet but it will in all likelihood require a season best effort to achieve the honor of running one more race this season. On paper, Yorktown’s Luke Harber figures to have the best chance for a boy in ECI to make it to state this year. Harber was the top finishing ECI boy at the Delta Sectional (and sectional champion I might add) and Delta Regional as well as having an ECI season best time of 16:22 this season. Following Harber are a quartet of boys from rival schools Wapahani and Monroe Central including Nick Cook and Brandon Ellis for the Raiders and Tucker Burris and Carter Miller for the Bears. This weekend’s semi-state will be the fourth week in a row that these teams have run against each other with these four runners trading spots with each other each race heading into Saturday.

Girls' State Hopefuls
After Southerland, seniors Makayla Robles of Delta and Olivia Keesling of Randolph Southern will be battling to perhaps snatch one of the last individual qualifying spots at the New Haven Semi-State. Last week, Robles placed 5th at the Delta Regional finishing just one second ahead of Keesling who finished 6th. This is also Robles’ fourth consecutive semi-state appearance where she has had impressive finishes in each one including 43rd, 42nd and 30th respectively. Keesling ran in the semi-state last year and placed 76th. Like the boys mentioned above, it will in all likelihood take a season best effort for one of these girls to move on to next week’s IHSAA State Meet, but the fact of the matter is, it takes a herculean effort for any runner anywhere to reach the state meet, so it might as well as be runners in ECI.

Young Guns
It is always exciting to see how young runners react to the big moment that is the semi-state meet and this year will undoubtedly be no exception. For the boys, there are a handful of underclassmen to watch including Muncie Central freshman Hayden Bradford, Wapahani sophomore Nick Cook and Monroe Central sophomore Eli Chamberlain. On the girls side, watch out for Blue River freshman Charlee Gibson and sophomore Sydney Fellers, Monroe Central sophomore Addison Coe and the Yorktown freshmen trio of Tori Oliver, Ally Romano and Sophia Goller who will undoubtedly use the experience gained from Saturday’s Semi-State in the years ahead.

Seniors
For seniors, the fate of what could be your last meet is always an interesting piece to the racing mix as emotion and the sense of desperation often take over during the race itself. And with this year, there are several ECI runners who could perhaps be running their last IHSAA cross-country meet this weekend. Fighting to race another day will be Makalya Robles, Cameron Eldridge, Ella Painter and Katie Alexander of Delta, Tucker Burris, Carter Miller and Kyler Shumaker of Monroe Central, Jay County’s Lindy Wood, Muncie Burris’ Michael Canfield, Randolph Southern’s Olivia Keesling, Wapahani’s Brandon Ellis and Drayden Gates, Wes-Del’s Luke Harber and Jaci Knott and Yorktown’s Luke Harber, Ryan Bade, Sum Brumley and Grace Huisman. ECI would like to congratulate not only seniors participating in the semi-state this weekend but all seniors across ECI on fantastic running careers and to thank them for helping improve the quality of running and racing across ECI these last four years.

​Good Luck to everyone this weekend!